Yes, this cake is literally names wacky, mostly, from what I know, the ingredients. Or lack thereof. This is an incredibly simple recipe that is both egg, nut and milk free, it can be made chocolate or vanilla in a simple switch of ingredients. Delicious moist and great for birthdays with some added icing. As a bonus, every icing with it is yummy. So let’s get the talk over with move on to the good part.

END_OF_DOCUMENT_TOKEN_TO_BE_REPLACED 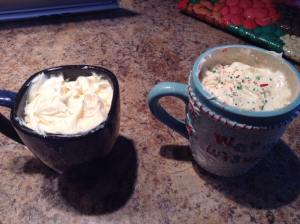 So, here’s a quick sum up of how this post came to be, Emily and I (Shayla) were at my house after hockey and I wanted to make white chocolate brownies, didn’t have all the ingredients so we looked for something else to make. On facebook I found a video of an awesome recipe and immediately we did the whole, look at each other excitedly thing and got to work. Before you know it we were making mug cakes. Lots of fun with absolutely delicious results. Here it is:

Now here’s how it went: 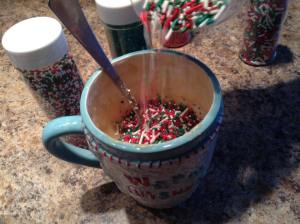 “Just had a moment while typing this, that is a really short list of instructions :P”

Notes From Shayla: I happen to be allergic to eggs so in my recipe I used egg replacer instead of an egg like Emily did. In the end result it, mine rose less than Emily’s did and was comparably less dense as well. Mine was nicely filling, with just the right amount of richness I enjoy. I also didn’t put sprinkles on top of my icing, I didn’t feel like it. It ended up being really delicious and we put the icing on a bit earlier due to impatience, but that meant it was nice and warm and the icing could melt slightly. This is a recipe I’d noticed before in another video that was done by popsugar instead of buzzfeed, same recipe but with some different details at the end. Take a look if you want: 2 Minute Mug Cakes. Also even better if you have some milk while eating it ^_^ Good luck and happy baking

Notes From Emily:  This was fun and easy recipe to make, and the cake tasted amazing! The cake itself ended up being really filling because it was so rich and dense. I also added the icing before it was completely cooled for the same reasons as Shayla, but in the end, the slightly melted icing only enhanced the flavour. I didn’t finish my cake, so Shayla sent me home with the leftovers. By the time I got home, it had become much denser, thus the textured took away from the flavour. I didn’t think about reheating it in the microwave, but when I talked to Shayla about it, she suggested that reheating it  would probably help make it less dense… Good luck and hope you enjoy this recipe as much as we did!